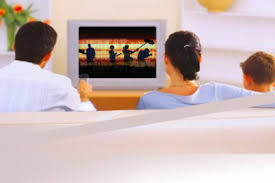 Is TV advertising down the tubes or taking off?

The digital age has taken its toll on mass media vehicles, to say the least.  Newspaper and magazine readership is down significantly.  Radio stations are struggling for revenues.  And many marketers have been wondering about TV advertising with so many DVRs in play, as well as competitors like NetFlix. But this year, the broadcast media has some good news.  Due to new technology available soon, TVs will be able to capture what audiences are watching, and relay it to advertisers via the web, opening doors to new ad revenues. LG plans to launch TVs with Cognitive software, which makes the tailoring possible.  And other manufacturers like Samsung and  Vizio are considering the same.  How does it work? Viewers opt in for the service, and in turn receive advanced interactive services.  According to an article in Advertising Age, a pizza advertisers could ask for a commercial insertion to viewers near its stores at 15% off, and LG could tie in Skype calling so that viewers never leave their sofa. It’s not only exciting for us advertising agencies, but the convenience can be exciting for consumers.  Starts to remind you of the Jetsons, doesn’t it?